Audition: A Memoir (2008), Barbara Walters’ autobiography, made me think of the word tome. Clocking in at 612 pages, Audition is no small snack of a book, but a dense-as-cheesecake read.

If you’re a celebrity, no doubt you received a shout out as Walters probably opened her Rolodex as she was writing, saying, “Oh, I forgot about him.” And the second half is more like a Barbara Walters’ Special retrospective in print…Anwar, Monica, Fidel, Rosie, Oprah and on and on.

But it was the first half that I enjoyed most. As the daughter of famed nightclub owner, Walters grew up in New York and Miami around the entertainers of the 1930s and 40s. She learned not to trust the dreamers, as least financially, because her father made and lost many fortunes through his work. She says she had to work to support herself and her family (nightclubs were a losing business once televisions became the family entertainment). So ironic.

Her first TV job was in the publicity department of an NBC affiliate and soon became a producer, thus on her way to “becoming Barbara Walters.” She was a woman in a man’s world, and she seemed to not let them bother her. Sure, there were lecherous men, condescending executives, and Walter Cronkite on the next plane trying to scoop her exclusive. But a girl can’t let them get her down.

Between relating her life story, Walters throws in some good interviewing tips. One is to ask someone about his or her first job. “Trust me, everyone, from presidents and movie stars to policeman and moving men, remembers his or her first job and will relate it in minute detail,” she writes.

The bottom line is Audition is a must for those interested in television news and media. Just be prepared to spend many, many hours with Barbara. She is persistent. 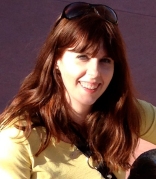 I am a writer from Cincinnati, Ohio. I love writing, voting and laughing.

Check out my work